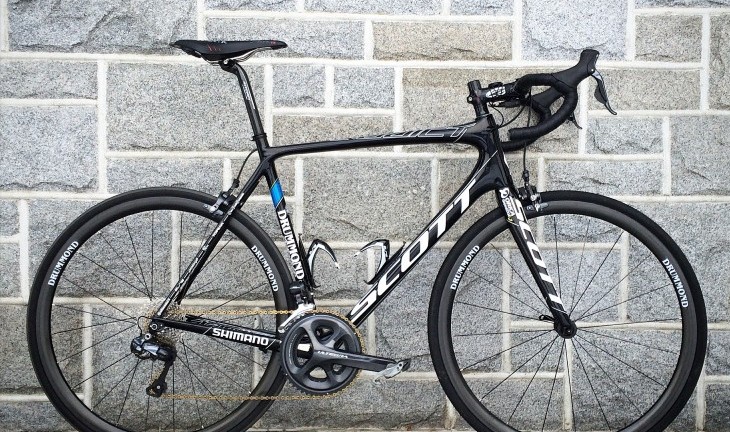 If you are looking for a tech oriented review you might as well move on. There are plenty of good tech writers out there and I am not one of them. I do however love to ride bikes and I will give you a snapshot of how I feel the bike rides. First off the 58 cm Addict Team issue that I am writing about is not the base model but one step up. They actually make three separate versions of the frame and this one is the HMX carbon lay up. The Team and SL versions are HMX and are some of the lightest frames made. The SL version is the lightest production frame weighing in at just under 1KG for the frame and fork combined. For me to deserve a bike that light I might have to give up donuts all together. I have also spent time on the lower HMF frame and can not really tell the difference between it and its more expensive counterpart other than the group and wheels. Ride quality to me is identical. The geometry on the 2014 Addict bike that I am riding is very standard for Scott I believe it is identical to the foil and the original Addict. Why change something that works as I have logged about 25,000 miles on my original Addict that is 6 years old. The geometry is definitely a full on road race geometry so is a little limiting for someone who needs a more upright position. That being said it has a very positive feel on the road and cornering is fantastic at high speed. I have descended on the bike in Park City at close to 60mph with no wobble. I built the Team Issue Addict up with Ultegra 11 Di2 and a set of Reynolds carbon hoops that we built up in the shop. The bike totally comes to life with a nice set of wheels. The first thing that I noticed was the comfort over rough surfaces. Scott claims that the bike is 39 percent more comfortable than the old addict. Now how do they come up with that number I do not know sounds like a marketing meeting to me. I think the percentage is funny but the quality of the ride is greatly improved . On my older Addict rough road surfaces would make me immediately get up off the saddle however the new Addict is like totally different beast as it smooths out the ride incredibly. I currently have about 3,000 miles on the frame and no issues so far other than basic maintenance. It has been ridden in all kinds of terrain as we do a lot of dirt roads in northern New England. The bike really shines where the roads get rough. I have been only riding 25 c tires for the past few seasons and this bike actually has room for 28 c tires. I know that the bigger tires are not slower because my climbing has gotten faster and it is not from ability. I have come to appreciate more compliance in a frame which actually translates to faster overall speed. I have ridden many bikes which I would deem as supper stiff race bikes that do nothing more than beat my body up. The 11 speed Di2 has been flawless and I take advantage of the new gearing options. I set it up with a GS rear derailleur for an 11/32 and a 52/36 crankset. We have plenty of 18 percent grade around here that warrant the 32 tooth. The newest version of Di2 is definitely the best so far along with the new Ultegra 6800 crank front derailleur shifts are better than ever. Even with the long cage derailleur shift are crisp and quick. The cock pit is comprised of WCS carbon seat post and Zipp carbon bars and stem. Saddle is the Fizik Arione VS X. For the wheels I hand built a set of carbon 35mm deep 24mm wide 24/20 hole rims. These were mated to a g3 Powertap and a Powertap branded front hub and laced with Sapim CX-Rays. This bike does everything that I ask of it and has a ride quality that is first class. Whether I am racing it at our local training series or doing a 110 mile gap ride it is competitive at both. The only restriction really is the riders ability of which I have very little but love to try. If you are looking for a race bike that rides like a nice road bike this is a great option. With the added bonus of being able to run 28c tires it now can be a three season bike as well. Dick Drummond
-
BlogCultureEric's Training BlogNewsProduct ReviewsService