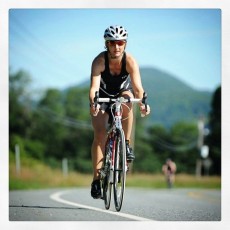 Name? Jen Duby, known by some as The Duby What do you do for work? Currently I’m a paraeducator at the Enfield Village School.  I also do some writing and proofreading on the side. In my former life I was a lexicographer (dictionary editor). Where are you from, and what brought you to the Upper Valley? I grew up in Acton, Mass. I graduated from the University of Mass. at Amherst with a BA in English and started work as a lexicographer at Merriam-Webster in Springfield. I met my husband after graduation and we lived and worked in the Northampton/Springfield area (including a couple years in Enfield, CT) for a while, but eventually Tom got a job opportunity at Spectra in Lebanon. Since we spent a lot of time in central New Hampshire backpacking and rock climbing, moving here was an easy decision. How long have you been riding? I had a Cannondale road bike pre-kids, then took a long time off from cycling or any recognizable form of activity other than kid-care, laundry, driving every road in the entire Upper Valley trying to get my son to sleep, more laundry, and generally not getting any sleep. Once both kids were in school and I could get a decent night’s sleep, I started getting fit again. I started with running, and then got invited by a friend to do a triathlon. I had done one sprint tri before having kids and really enjoyed it. But my problem was that my bike was now so old it needed new parts that were not readily available and I didn’t know if it would be rideable. One of the local bike shops helped me solve that problem and I did the tri. I did pretty well and loved it. That was maybe 4 years ago. It’s been a slippery slope. What was your first bike? Two bikes stand out. The first was a little yellow number with a banana seat and streamers on the handlebars. It was a sweet ride that got put through its paces. It was handed down to my younger sisters and along the way was set alight while being ridden over a flaming jump by my brother. My first ten speed was a sky blue Schwinn that I rode all around town. Getting that bike was a big deal. It was brand new, and all mine, which in a family of 4 kids didn’t happen a ton. What are you currently riding? I have a Trek Domane road bike, a Scott cyclocross bike, and most recently I bought my beautiful Felt B14 tri bike, which I will compete with this summer.   Best riding memory? Last summer Tom and the kids and I camped in Acadia State Park and rode the carriage roads. What was great about it was that it combined some of my favorite things: biking, my family, and camping. All time favorite place to ride? I’m still learning the good places to ride in the Upper Valley. Any day on the bike is a good day. What is your favorite thing about riding? I like the physical work. I like learning new skills and tackling new challenges. I like working hard and seeing a payoff in performance. I like learning from others and improving my technique. I like that time on my bike puts seemingly insurmountable problems back into perspective. Most of all, I like riding with friends, and I am grateful to have met a bunch of interesting new people. Do you race? What’s your favorite race? I like to race in triathlons. I love the challenge of multisport. My favorite race has been the MascomaMan because I love local stuff. Since that is now defunct, my new favorite will probably be the Lakes Region tri, which is back from hiatus. It will be held on Newfound Lake, which is where I spent most of my summers as a kid and I still have family there. Favorite post ride beverage? What do you mean, that’s not what you meant? Ok, for post-post-post ride, then bourbon please. Besides riding what do you enjoy doing? Well there’s running, duh. And reading and writing. But my favorite thing in my life besides riding is when my family makes me laugh, which I’m happy to say happens a lot. Favorite band or style of music? It’s hard to pick. I really love music. I like to find stuff on Spotify, either stuff I’ve never heard before or old stuff I’d forgotten about. I like to take a song I like, start song radio from that, and then “like” all the songs it brings up that really grab me. From that, I’ll create playlists. In no particular order, I like alternative, R&B, soul, some country, traditional rock & roll. I like something of everything. Except heavy metal.
-
BlogCultureEric's Training BlogNewsProduct ReviewsService