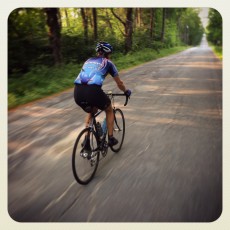 Do you remember your first bike? Well that little Swiss bike was pretty special. I also loved a yellow Schwinn Sting-Ray (removed the fenders). Like most kids, I skidded those tires to the threads. I also remember my first local bike shop, Don’s Cycle Shop, in Fairfield, CT; it’s gone now. It was tiny, but had all the great elements. What bike are you currently riding? I ride a Cervelo S2; coach cross country MTB on a Scott 29er, hard tail, and last year I spent a lot of time on a basic Scott cross bike. Those BMC cross bikes you have in the shop look sweet and given the amount of dirt I am riding in Canaan, it’s only a matter of time before I pull the trigger and upgrade to one of those. Do you have a favorite riding memory? In grade school, one Saturday, the stars aligned and about fifteen really good friends got together on bikes. We played a game we called “Bike Chase.” Essentially, it was a town-wide game of bike tag. The riding was sick because it combined just about every type you could imagine: sprints, TTT, trials, MTB, cross, individual pursuit, BMX. We tried anything not to get tagged, and the game lasted for hours. If you could ride anywhere in the world? Right now, I am itching to get back to Ketchum, ID to mountain bike, but Jered Gruber and Tim De Waele’s Giro, Dauphine and Le Tour pics have me jonesing for the road climbing in Italy and France. Over there, it would be the Stelvio, or Col de Sarenne, which I have only descended. What’s your favorite thing about riding? For me it is the immediacy of feeling flow state. Riding just makes me happy, even when there is suffering; actually I enjoy that, too. Rather than avoid or fear the pain cave, I like hanging out in it and trying to make it a little roomier, so, it’s the physical side of cycling that I love. Group rides are great for this because they demand so much more of you. In terms of bike culture, I don’t really get caught up in the tech side of things, -components, or all the numbers our computers record, although when I ride alone it is fun to mess around on Strava. Favorite post ride beverage? Chocolate or a coffee milkshake. Besides riding what else do you enjoy doing? Well, I love to read. Your readers might enjoy Behind The Stare, by Geoff Proctor. It demystifies the world of European cyclocross. Do you have a favorite band or musician? Liz and I are headed to Boston at the end of July to catch the Tedeschi Trucks band. Right now, I’m fixated on a live version of Taj Mahal and the Tedeschi Truck band’s, “Leaving Trunk.” Check out their “Midnight in Harlem,” too; it’s beautiful. Any parting thoughts? In Canaan, someone just paved a new road track for car clubs and motorcycles and they modeled it after Watkins Glen. Maybe a local bike shop should look into securing a weekly time slot…
-
BlogCultureEric's Training BlogNewsProduct ReviewsService