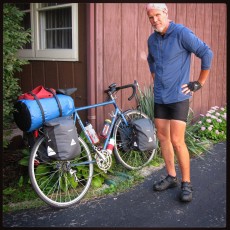 Name? Koby or if you want to be formal, Kobus Van Beest Jr.  What do you do for work? I taught high school science and English for the last 20 years but redeployed in the spring. A big reason I retired was to take a cross country bike tour with a friend who told me “I’d love to do that, but only if you will.”  Back in the day I was a stay at home dad; before kids, I built timber frame houses.  Where are you from?  I grew up in Minnesota and Illinois, just south of Chicago — a very country mouse / city mouse kind of childhood.  What brought you to the Upper Valley? Love, I met a woman up in the white mountains. We tried living in the midwest, but her roots were in New England. We finally moved back, bought land in Canaan, and I built our first house.  Do you remember your first bike? Absolutely, but it wasn’t mine. My older, big brother (he was as tall as his kindergarten teacher–for real) had a blue and white Schwinn Speedster. When I sat on the seat I couldn’t reach the pedals. After some crazy falls, I mastered dismounting and pretty much took it over. The first bike I bought was a crescent road bike. I remember thinking it was really cool. Besides being orange it had a Reynolds 531 frame and Campagnolo derailleurs…sadly, it got stolen.  How long have you been riding? A long time–the speedster was 1960, the crescent 1971…I fell in love with touring back in the early ‘80’s, before kids and then got my son interested in the ‘90’s…I commuted to work in the ‘00-10’s…  What are you currently riding?  I just rode nearly 3000 miles on the very same Nishiki Cresta that I bought in Seattle and rode to New Hampshire back in ‘84. I have put in a few new parts over the years and you guys upgraded it some this past summer–turned out, I should have had you get me a new back wheel too!  I also ride a Specialized mountain bike fairly often, but those new Scotts you have in the shop look so much sweeter! Do profiled riders get to test ride…?  Do you have a favorite riding memory?  Lots of favorites…one that stands out was on single track up in the Kananaskis-Canmore area of the Canadian Rockies. A few days with my teenage son, his youthful energy, and the chance to explore some beautiful country at bike speed made for a special time.  If you could ride anywhere in the world where would you want to ride?  A friend and I have been planning for years to go ride in Nepal and Tibet–I would still love to do that! I would also love to tour around Ireland or the Netherlands with my wife, maybe even on a tandem. We had a Finnish exchange student stay with us once and I am trying to convince her to ride with me north to the arctic and then back down through Norway, Sweden and Denmark.  That’s probably too many anywhere’s…  What’s your favorite thing about riding?  Discovering something unexpected as you are riding along. Once, under some really low clouds, I noticed these giant poles disappearing up into the grayness. There were these huge blade things spinning around appearing one at a time, in and out of the gloom–they were wind generators. For all the world they looked like giant arms sweeping down into sight and then swinging back out of it. It was all very jack and beanstalk-ish! I stopped and watched them for quite a while.  Coming upon something unusual makes me happy! That and I love to eat–7, 8, maybe 9000 calories a day on my long tours (and I still lost weight–wtf?).  Favorite post ride beverage?  On my last trip I developed a serious rooibos tea habit whenever I stopped to eat. something about hot tea with my food just hit the spot.  Besides riding what do you enjoy doing?  In the winter, I telemark ski in the back country as much as I can. Trees and steeps are a welcome combination. In warmer weather, I plant, tend, and harvest a pretty big garden–mostly because I like to eat, as mentioned earlier.  Do you have a favorite band or musician?  Again, way too many…but if you could check my most played in the last month you would definitely find Colin Stetson–often with Sarah Neufeld. (here is a link to a concert the two of them recently gave: https://www.youtube.com/watch?v=HLKZ1Scef)  warning: my tastes are a bit esoteric.  Any parting thoughts?  When you are talking about yourself, keep it short… (lol)
-
BlogCultureEric's Training BlogNewsProduct ReviewsService